After installing Solus operating system my first attempt was to install Jekyll, which is the backbone of this website.

You can Jump directly to Installation part by clicking here. 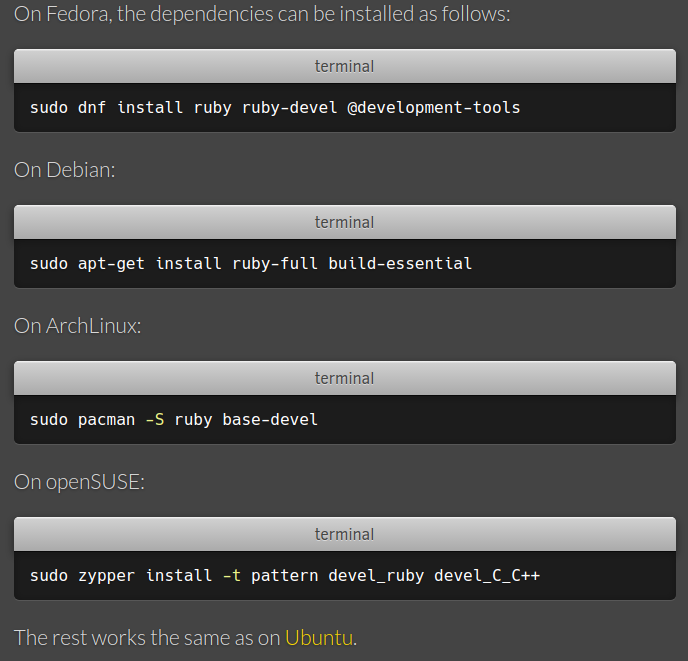 In short, I had to find how to install jelyll in Solus. So i started hunting down the package equivalents of

After a while, I ended up seeing this.

next, when i searched for ruby in eopkg I found a package named ruby.
So I just ran

And I got ruby installed.
My next try was to continue installation as shown in jekyll installation guide. I appended lines into bashrc then started to install jekyll and bundler gems by issuing

after some time I got an error about building something. It also said, I may be missing packages like ruby-development or ruby-devel. So I tried Installing ruby-devel and again ran gem install. This time it succeeded and I was able to use jekyll.

In short, all we have to do for Installing Jekyll in Solus is as follows.

Issue below commands one by one.

Install Jekyll and bundler as follows:

Voila!
You’re ready to Go.
Jekyll is now succesfully installed and you can use it like it is on any other Operating systems.

If you have any problems installing this, feel free to drop me a comment. :)

You may also enjoy

Some of you may already know that you can freely host a website on github. And this very website you’re reading right now is no different. This is also hoste...

How I am using tmux for blogging efficiently?

Some of you may already know about the piece of software I’m talking about. Tmux. It is a terminal multiplexer. It means that, you can make many virtual term...

Trying out The Solus Operating System….

This was the First time I was using an operating system not based on Debian. I have used Elementary OS based on Ubuntu, Ubuntu (which itself is based on Debi...

This site is now A PWA!

Finally I have successfully turned my website into a PWA. For those who don’t know, A progressive web application is a type of application software delivered...